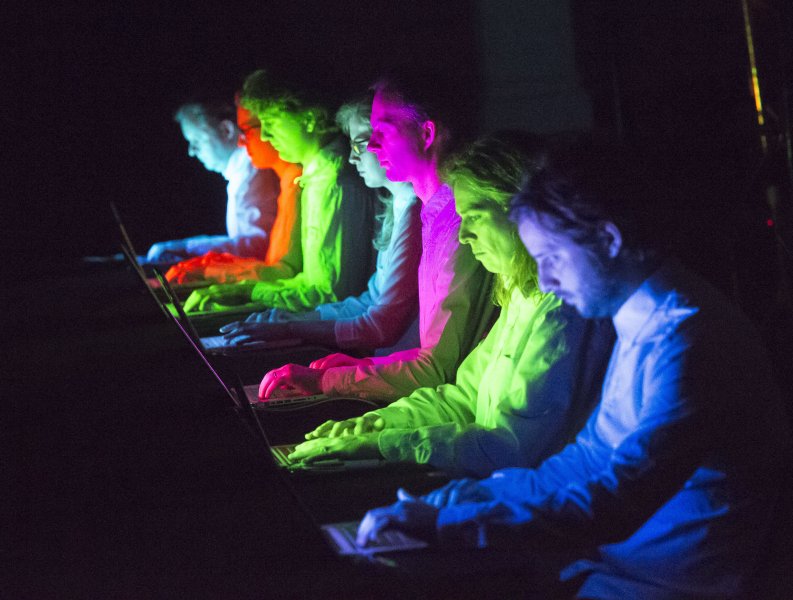 SCENATET is an ensemble of soloists and artists in contemporary art and music, combining flexible expertise in a cross-artistic field of music, drama and happenings.

Matias Seibæk (b. 1981), percussion, is educated at the Royal Danish Academy of Music and graduated from the soloist programme in 2009. Matias Seibæk is working primarily as a soloist and chamber musician within new music. Besides SCENATET Matias is also a member of the chamber ensembles “Jeppe Just Instituttet” and the anvantgarde jazz fusion “Mauro Patricelli trio”.

Vicky Wright, clarinet, studied at the Royal Academy of Music in London, where she was awarded numerous prizes, and at the Conservatorium van Amsterdam. She has worked with the groups Lontano, Expose, Apartment House, the Ruysdael Quartet and is a member of Ensemble Plus Minus. In 2012 Vicky made her debut as a ‘flying soloist’ in Birmingham Opera’s award winning production of Stockhausen’s ‘Mittwoch Aus Licht’.

Sven Micha Slot (b. 1972), piano, is educated at the Royal Academy of Music with Professor John Damgaard. He studied with pianist Anne Øland and Professor Einar Steen-Nøkleberg in Oslo and Hannover. Sven Micha Slot primarily works as a teacher, freelance chamber musician and soloist within new music.

Kirsten Riis-Jensen (f. 1978), violin, is educated from the Royal Academy of Music, Aarhus, and also studied in Oslo, Norway. She made her debut from the soloist class at the Academy of Music in Malmö, Sweden, in 2008. Kirsten is especially dedicated to the contemporary music scene, and works as a performer, orchestra- and chamber musician. She is currently based in Switzerland.

Karolina Ôhman (b. 1985), cello, studied with Thomas Grossenbacher, Thomas Demenga and Torleif Thedéen, and graduated with both a soloist diploma from Zürcher Hochschule der Künste and a specialised masters in contemporary music from Musik-Akademie Basel. Karolina Öhman is an international performer of comtemporay music and has played with several contemporary music ensembles. Besdes SCENATET she is a member of the Curious Chamber Players (Stockholm) and Ensemble neuverBand (Switzerland).

Signe Asmussen (b. 1970), soprano, graduated from the soloist programme at the Royal Danish Academy of Music in 2001. She is recognized as one of the most versatile and charismatic, young singers in Denmark, a musical chameleon, effortlessly moving between all genres, from Baroque, lied and opera to new music and salsa.