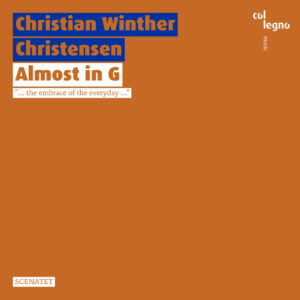 SCENATET is very happy to announce the release of the recording Almost in G – pieces from the praised Christian Winther Christensen portrait concert performed at Borealis Festival in 2015.

The recordings are made in collaboration with the acclaimed art music record label Col Legno in Vienna, and SCENATET and composer Christian Winther Christensen will hereby join an impressive list of world-renowned ensembles and composers released on Col Legno!

“There is an urgent originality at work here that absolutely sparkles next to less daring new classical recordings. Comparisons aside, it is a thrilling hour of compositions expertly performed by the SCENATET Ensemble for Art & Music,” badpress-blog. Read the full review here.

Toneshift.net calls Christian Winther Christensen a thoughtful and enigmatic composer “showing us the entire construction process in a manneristic fashion, and giving himself the time to invent and alchemically morph materials into other states of being to juxtapose them in a schematic and very interesting way.” Read the full review from Toneshift here.

Editorial note from Col Legno
A distinctive language, an original tone, a unique voice – all these phenomena are rarely experienced as convincingly as in Christian Winther Christensen’s music. Earlier periods may flicker up once in a while, yet this music is fundamentally and radically of the 21st century. Yes, these are classical instruments. And yes, this is New Music. But the familiar elements are assembled and rearranged in ways that
make you want to listen to this music again and again, wherever you are, whatever you’re doing. On his first encounter with this album while sitting in a Berlin park our First Listener, radio maker Peter Meanwell, noted: “… within this music is an obsession with the detail of being human. The peculiarities that make us unique, the infirmities that construct character. It is the embrace of the everyday …” —
SCENATET are one of the most innovative ensembles in Europe – we are delighted to welcome them here with us at col legno!

The CD is released with the support from the Danish Composer’s Society, Solistforeningen, the Danish Conductors Association and DJBFA – Composer and Songwriters’ Production Pool and Koda’s Cultural Funds.