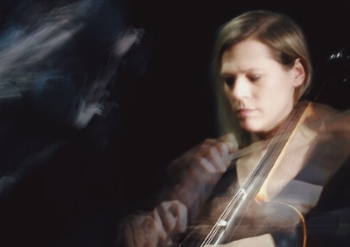 Automata-Etude is a work of sound and video in 5 parts, composed with the purpose of creating a unique fusion and abstraction of sound, video and movement. The visual material is constituted by the performing musician’s technique and bodily gestures.

Composer, Simon Steen-Andersen, and filmmaker, Michael Madsen, are exploring the movements of our physics, and how it makes the foundation for the music, we listen to. By using a robot arm as recording technique, it is possible to create free-floating moving patterns around the musician, that cannot be seen by the naked eye. In that way, the camera becomes the bodily anatomy of the music, and the musical choreography goes beyond the human movement.